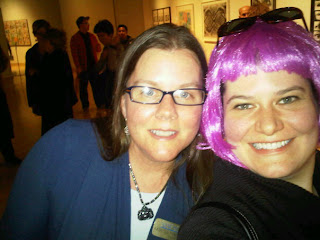 I attended Andy Warhol: Private and Public in 151 Photographs exhibition opening this evening at the Samuel Dorsky Museum of Art... complete with wig.  Wigs were encouraged attire as a nod to the late Warhol, who, as you likely know, was a fan of artificial hair.

Truthfully, I'll have to go see the show again with fewer people in the gallery.  It was packed with people and I was concerned, initially, about how freakish I must look with dutch boy fuscia hair.  I quickly got over feeling odd (I was on the campus of SUNY New Paltz, after all), but the crowd still made it difficult for me to really take in the art.  I guess openings aren't so much about the art as they are about the crowd.  I did have the pleasure of briefly meeting Sara J. Pasti, the Director of the Dorsky.   Thanks for introducing us, Kt.  She even commented how she loved my wig.  Not just the color, but the cut as well... maybe I should consider this as a pernament look - hmmm...

One thing that stuck out for me was the accessibility of the medium.  The black and white silver gelatin prints take a little know how it's true, but the Polacolor 669 portrait prints were something anyone could do.  I'm not saying that anyone could have taken the photos that Warhol took, rather that the medium was a tool of the masses.  Heck - I have a bunch of the stuff in the studio right now to make slide transfers and portraits with myself.  This is probably why I felt a connection to these pieces, crowded as the gallery may have been.  Alternative process photography has always been a love of mine, even if I haven't done an awful lot of it.  Keep an eye out for some Polaroids and cyanotypes in the not too distant future. 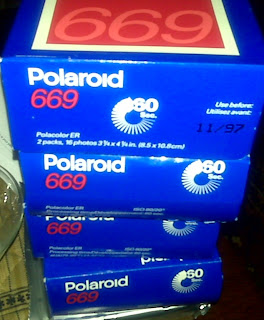 Posted by Helen Gutfreund at 11:36 PM