A Moment at MoMA 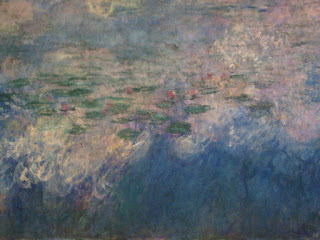 I spent a good portion of my day today (er - yesterday - it is after midnight as I write this) in a car traveling to and from.  Well worth it.

Burton
I may become very unpopular by saying this, but the Tim Burton exhibit at MoMA left me cold.  I know, I know... everyone loves Tim Burton, and I know, I know - I am trying to be more objective about what kind of art I am looking at and what I think about it.  So yes - I reminded myself of that while in the exhibit and it just didn't work for very long.  In all fairness to the work, it may have had something to do with the hoards of people in the exhibit.  There were so many people in there, well... it was like trying to leave a Grateful Dead show when they played RFK Stadium in DC and you had to walk through this tunnel to get back to the parking lot.  The exhibition galleries acted as funnels for ushering people here and there.  I felt like I was in a wave and had no control over where I went next and I was overtaken by a big one.  Under water.  Uncomfortable.  You get the point.  I did take note of an interesting letter to Johnny Depp though about an idea Burton wanted to try in his version of Charlie and the Chocolate Factory.  Interesting in an historical context.  I also noted Burton's use of acrylic paints in his sketches and paintings.  I never think to use acrylics because they seem so flat and, well, plastic to me, but I kinda sorta liked some of the results he got with them.  Maybe acrylics are like cameras... its not so much about the camera as it is about the photographer.  I'm not discounting the merit of Burton's work - just claiming in public that it isn't my speed.  So after deciding I didn't want to drown in a sea of teenage boys who dig movies, it was time to move on.

Kentridge
William Kentridge: Five Themes was my speed.  According to MoMA's website on the special exhibit, [Kentridge is] "Best known for animated films based on charcoal drawings, he also works in prints, books, collage, sculpture, and the performing arts."  What I really love about Kentridge is the sense you are left with that something has come before.  There is a history.  You have a sense of it even if you don't see it - but you do see it.  Many of his animated films are made via a process of adding to and erasing from a drawing and each step filmed for animation.  What is left is a one panel drawing, but you can see evidence of what was there.  It's almost as if you can see and feel the history of the character in the drawing.  Movement has happened here and this is merely one (the final) moment that we get to know about in the drawings.  They are beautiful too - we're not talking about stick figures here.  This man can draw.  And his torn paper animations?  Fuggetahboutit!  He can draw so well that he doesn't even HAVE to draw.  Gorgeous silhouettes of people, animals, costumes - mere suggestions of form from ripped up pieces of paper but that dance right off the screen in such a believable way that I sat and watched slack jawed.  This show closes on May 17th, so you still have a little time, but make sure you see this exhibit.  It was the best thing I saw all day hands down, and I wish I had spent more time with it.

...and More!
I managed to get to a couple more galleries while I was there, surprisingly, as I was pressed for time.  Architecture and Design was interesting - its always a hoot to see common household kitchen utensils in an art museum - historical context, ya know.  And who doesn't love an Eames chair!  Also managed to get to the Picasso exhibit, which I breezed through except for some quality time in front of the series of five "Bull"s.  Loved this because you could follow him through his time and process from a very  accurate, almost anatomical drawing of the bull all the way through the next four levels of abstraction ending in a "simple" line drawing.  It was easy and interesting to see the connections he was making and that the viewer can make visually.  I also noted that he always included the bull's "parts", no  matter how accurately represented or abstracted. 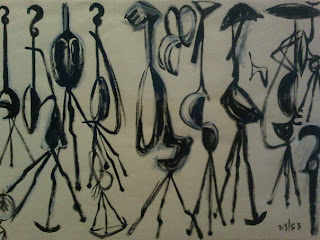 I got to a drawing gallery too.  Lots of great stuff for me there - Mark Tobey (a new fave I have to do more research on - I only was introduced to him recently by Amy Lipton in her curated show, Body, Line, Motion: Selections from the Permanent Collection, at The Dorsky Museum in New Paltz) , Jean Dubleffet, and more Kentridge, to name a few.  But the stand out in my mind was a drawing by David Smith, Untitled (Tank Totems) 1953.  I'm certain that getting acquainted with the Smith collection at Storm King Art Center as part of my docent training informed this for me, as it did for other exhibits as well, especially the aforementioned Picasso Bulls.  But being able to see the connections between Smith's drawing (which I am largely unfamiliar with) and his sculpture (which I am becoming sorta familiar with) was a little a-ha moment for me.  The artist only has his own "handwriting" if you will.  Something I;ve always know and expounded on in conversations before, but a good and solid recollection now.  Maybe it is different for other sculptors - I don't know.  Studying sculpture and sculptors is relatively new for me.  But in this instance, at least, it is clear to me that the marks made on the page and the marks made in space are one and the same, and I think that is lovely.

What I Wanted to See But Missed 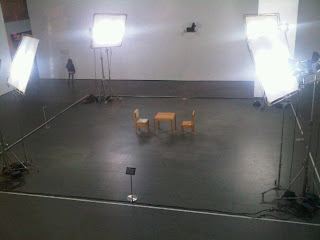 Posted by Helen Gutfreund at 12:18 AM